Ease of Use on Keychain

The outcome of the review was not influenced (other than having more data), we were just able to beat the crap out of this knife without worrying about breaking it.

Just about everybody knows about Swiss Army knives.

If you describe the concept of an everyday carry knife to somebody who doesn’t know anything more wild than a coffee shop open until 9 pm they’ll say, “Oh, like a Swiss Army knife?”

You can find knock-off SAK “Classics” by the bowl at your local gun and knife show.

Chances are there are one or two such knives, missing their toothpicks, inhabiting a drawer in your house.

They’re classics but are often overlooked by modern preppers, bushcrafters, and survivalists looking for a survival knife.

I’ve been knocking around a Victorinox Huntsman for a while now, testing it as an EDC knife.

Should you overlook this classic blade or should you add one to your daily carry essentials?

The Swiss Army Knife is the Seinfeld of EDC knives. 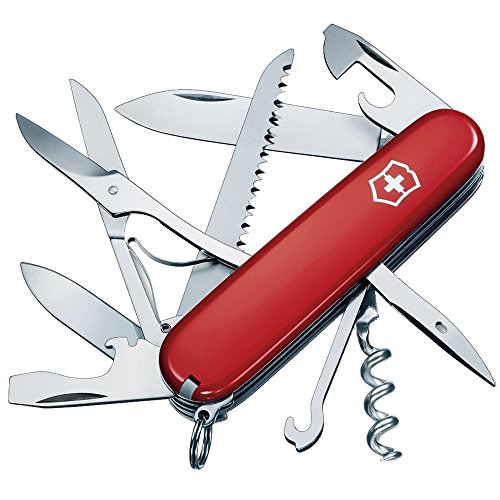 You see, back when Seinfeld came out in 1989, there had been no show like it before.

The comedy was different, the characters unlike those in any other sitcom, and Seinfeld broke new ground for television which shows have been building on for decades since.

But, if you look back at the show now, your first thought might be, “What’s so good about it?”

Modern shows have done nearly everything better, so it can be hard to see why Seinfeld is such a classic.

They’re baby’s first utility knife, and more modern and fancier versions exist, so why buy a Swiss Army knife instead of these newer styles?

The Swiss Army Knife and Me

I’ll admit that I was originally in that camp.

I have multiple EDC knives. I tend to rotate them out as I try out new models.

Two standbys include a Kershaw 1025 on my keychain and a Leatherman Wave that lives in my EDC backpack.

If you can’t tell, I tend to prefer small, efficient tools over big, fancy blades.

So, when I tried out Victorinox’s Huntsman, I wasn’t expecting to like it as much as I did.

This specific model of Swiss Army knife I tested out is Blade HQ’s exclusive “Lobo Loco” Huntsman by Victorinox.

Blade HQ has a variety of exclusive knives made by Victorinox. This one has a blue color scheme and a wolf howling, “Knives!” on the scales.

Honestly, this aesthetic won’t be for everyone.

Half the people I’ve shown it to think it’s gaudy and others think it’s cool. One person said it’s, “…subtle as a flower tie.”

Thankfully, if you don’t like these scales (which are ABS plastic), you can find the Huntsman with more subtle colors.

As for the tool itself, it’s a three-and-a-half ounce multitool with two blades that’s almost as long as the average man’s palm is wide.

In other words, it’s not one of those tiny Swiss Army knives you can pick up for a couple of bucks.

One knife is a little under three inches long and the other just over an inch and a half.

You also get various tools on this somewhat-hunky Swiss Army knife, such as a wood saw, corkscrew, scissors, a carrying hook, and more. The two screwdrivers are the bottle/can opener tips and neither are Philips head. (If you want a Philips head screwdriver, check out the Super Tinker instead of the Huntsman!)

The sewing eye is halfway down what Victorinox calls the reamer[2].

You can use it as a sewing awl for leather and thick canvas and can use it to drill holes through wood[3]. Spin it around in a hole to make the hole larger.

Plus, the reamer is also a scraper, making this tool surprisingly good for leatherworking.

The two stainless steel blades are on opposite ends of the tool so you can open them both at once if you like to live dangerously.

There’s no true lock holding either one open, as is normal for a Swiss Army knife.

Overall, I found that I liked the Huntsman more than I thought I would, considering my previous Victorinox experiences.

Let’s look at several aspects of the Huntsman in detail:

This was where I was expecting this tool to fail and what surprised me in the end.

It’s larger than the Victorinox Classic SD, by far, but it doesn’t get into the realm of too large.

I attached the Huntsman to my keychain and, though it did bump into my knees while in my truck’s ignition a couple of times, wasn’t as obnoxious in my pocket as I expected.

Instead, the largish size (for a Swiss Army knife) worked in its favor in my hand.

Unlike the dinky SAKs, this tool is large enough to hold onto with confidence. This made using everything from a blade to the corkscrew easy.

As I tend to use a blade’s heel or tip more than a long expanse of edge, I used the smaller blade much more often than I used the longer one.

Both are simple drop point blades which work well enough.

You shouldn’t expect too much from stainless steel when it comes to holding a good edge but the Huntsman surprised me.

It came out of the box sharp and somehow retains an edge better than my Kershaw 1025!

Most of the tools worked well enough.

They were all large enough to be easily used without being too large and getting in the way.

I didn’t use it as a carrying hook but it was good for grabbing a line and applying tension!

I even used one of the Huntsman’s blades as a seam ripper to good effect, so there are more than 15 uses for this tool.

Though, I think it’s cheating to call a keyring a tool.

Overall, there wasn’t too much to dislike about the Huntsman.

Most of my problems with it are nitpicks, not serious issues. One of these nitpicks is where Victorinox put the keyring, which is next to where most of the tools fan out.

This makes using the longer blade easier when you have keys attached, but as I mentioned, I used the shorter blade more often.

This got a little awkward.

Also, while the finish held up to my keys and other metal instruments on my keychain, it is starting to get dinged up next to the toothpick and tweezers…

…which, again, are right next to the keyring, and are a bit awkward to pull out.

Plus, there’s no file.

Overall, I think the Huntsman is a well-sized Victorinox Swiss Army knife that has a good variety of tools and is more capable and easier to use than the Classic SD.

Though, it may be too large for some people’s keychains.

Concealability: 3.5. The Huntsman is small enough to live on your keyring, though it’ll take up as much volume as the rest of your keys.

Durability: 3.5. It’s all ABS plastic and stainless steel so you don’t have to worry about it suffering from the weather, but the blades are thin and won’t stand up to heavy abuse.

Fighting Ability: Haha, no. Don’t expect to defend yourself with this knife. But, that’s not what it’s for.

Utility: 4. The Huntsman has a variety of tools (though not as much as a multitool), which makes it quite adaptable, but the thin blades and lack of blade locks limit what you can do with the knife portion.

Overall: 4. The Huntsman Swiss Army knife isn’t a heavy-duty EDC knife, but it’s more capable than many EDC knives of the same size due to its many tools. 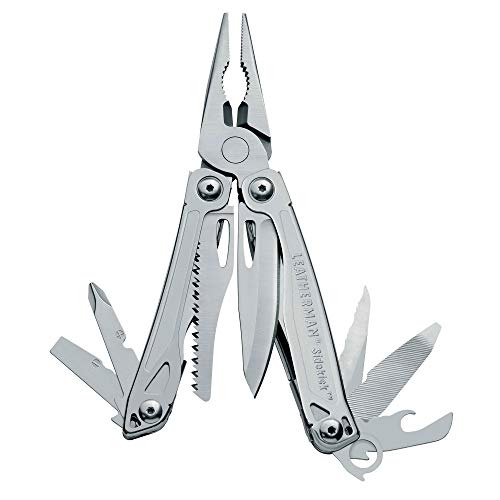 Victorinox’s Huntsman Swiss Army knife is a good EDC tool but it’s not a good survival knife or self-defense knife.

If you aren’t interested in so many tools then you may want to try the Benchmade Mini Griptilian, which is about as long but is thinner, weighs an ounce lighter, and is all-knife.

A good keychain knife may be something like the Kershaw 1025, which is very small in the hand but surprisingly ergonomic when unfolded (for right-handed folk).

On the other hand, a more-dedicated multitool such as the Leatherman Sidekick can give you a more robust set of tools while taking up about the same volume (though it does weigh twice as much as the Huntsman!)

And finally, if you want a smaller Swiss Army knife, then the Classic SD is always a great choice.

Plus, if you like the crazy wolf styling, Blade HQ has a “Lobo Loco” Classic SD Swiss Army knife as well!